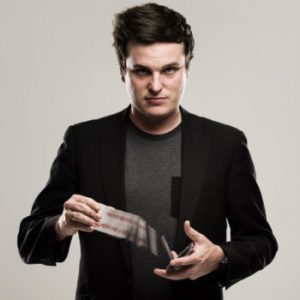 Matt Tarrant is one of Australia’s most popular magicians, mentalists and entertainers.

Performing as a Mentalist and Magician combining psychological skills with insane magic abilities creating a fun, incredible and jaw dropping stage show involving plenty of audience participation Matt is one of the top upcoming international magicians.

“Don’t expect rabbits, hats or capes – this is the new era of Magic.”

You may have seen him perform on The Project, Millionaire Hotseat, US Cable TV, Channel 7 Australia, Channel 9 Australia and Channel 10 Australia or on the internet with one of Australias largest social media followings.

“Our CEO can’t stop talking about the magic and we’re looking at getting Matt back again for our Christmas party. Thanks so much!” – Smart Collect SA

‘The Australian Cinematographers Society just had their 2014 annual Awards, Matt was our main entertainment and he held the audience in the palm of his hand. He was interesting, captivating and very clever and entertaining. I’d highly recommend his act!’ – Ernie Clark ACS

“We booked Matt Tarrant to provide mind magic at our conference dinner with 100+ attendees. Matt was funny, entertaining and extremely tricky. Consider us “Mind-Blown!”” – GKR Karate

“Booked Matt for a corporate event. Great show, was blown away by the magic and everybody loved it!” – Accodex

The professionalism and scope of Matt are far beyond that which I had expected of “local” performers. Truly an international standard, everyone was captivated and his magic left us all scratching our heads. A breeze to deal with and a show we won’t forget in a hurry.” – TOTLD Design