Pierre Ulric
Illusionist, Magician, Mentalist
Pierre Ulric is a professional entertainer and consultant based in Perth, Western Australia. His passion is to offer moments of wonder to other people, stimulate creativity and generate astonishment through magic and illusion.

Dynamic and original, whether it is on a theatre stage for hundreds of people or in an intimate private setting, his performances are sure to be memorable.

In addition to his theatrical stage shows, he is available to perform at private events, business events and functions all around Australia and pretty much anywhere in the world!
Make Booking
Shortlist 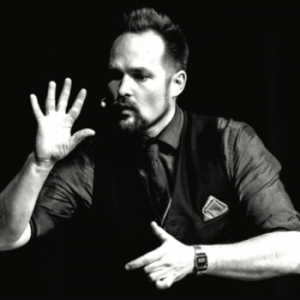 Pierre Ulric migrated to Australia from his native Canadian province of Québec seventeen years ago, and can now be seen weaving his theatrical surrealism around the world, when he isn’t gallivanting in Perth, Western Australia. He has been involved in the craft for over 20 years and has won several peer awards, notably Australian Strolling Magic Champion (2003) and West Australian Society of Magicians Magician of the Year Award (2003 and 2005).Pierre Ulric has experimented with various performance styles and venues: stage and proximity manipulation, illusion, technical card demonstrations, pantomime, physical comedy, mentalism, hypnosis, corporate presentations, restaurant work, cocktail work, children’s entertainment, theatre, street magic and busking.

Most of his current creations are psychological or visual cabaret pieces with a distinct neo-vaudeville flavour.

Pierre believes that magic is a powerful communication and expression medium, and particularly enjoys sharing his love for mystery performance with unsuspecting audiences from various corners of the world.

He has performed in numerous countries including Australia, Canada, USA, France, England, Italy, Japan, Burkina Faso & Indonesia and is successful with all types of audiences, thanks to his love for languages and non-verbal communication…